LAURA KENNY CBE GB’s Most Successful Female Olympian in any Sport, Laura is a Professional Track and Road Cyclist. She Recently Won Two Golds at The European Championships Despite Son Albie Waking Her Five Times The Night Before

Image courtesy of Soreen – will I be in two years? I don’t know. I can’t imagine cycling not being in my lite.’

I would encourage any child, not just my own, to get out there and get on a bike. I learnt to ride when I was about six or seven. I remember going out with my family in Lee Valley, because I grew up down south, and just absolutely loving it.

We live in much as it’s real v hard – Albie was a year old in August and is still not sleeping well – being a mum is the best job in the world. But it’s also renewed my love for cycling, because it’s given me a completely different outlook. You get wrapped up in Olympic cycles, you think, “I need to do the next one, I need to go to the next World Championships, I need to go to the next European Championships”. You move from race to race. Stepping away for the first time to nave a break and have a gaby allowed me to think. “Why am I doing this? Wnat do I love about this sport?”.’

‘I don’t think motherhood will affect my sporting success. I never imagined going to the World Championships six months after giving birth. That came around so fast and it just sort of happened; my fitness just came back. I suppose it’s a little bit different if you’re an athlete because you don’t get maternity leave. The sports world is constantly developing and getting better – if you leave it for too long you’ll never get back. So I just threw myself back into training. ‘The hardest thing is leaving him behind. I’m not ready to leave him for a night yet so he’s been coming to all my training sessions and training camps, and he will continue to do that until I’m ready to leave him, I guess. 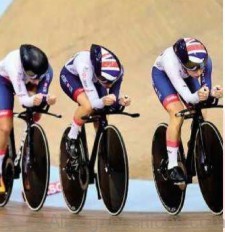 INSPIRING THE NEXT GENERATION

I won’t put pressure on Albie to cycle just because he has our cycling genes [Laura’s husband Jason Kenny is also an Olympian], I’m not bothered whether he wants to be a bike rider or a piano player, he can be whatever he wants. But I hope by returning to the sport so quickly and successfully, I’ve demonstrated that you can achieve anything if you set your mind to it. ‘Serena Williams has said she wants to keep up professional tennis until her child can remember watching her play. I’m not sure how long I’ll go on. When did Sir Chris retire? At 36, I think. I might have my own little army by then! But I’m certainly not ready to stop now Cheshire now so it’ll be nice tor him to be out on the quiet roads and just experiencing what I did as a child. Being able to ride a bike gives you that freedom -there’s nothing holding you back. I think you lead a healthier lifestyle by exercising and being outside so I will encourage Albie to get outdoors, whether that’s on a bike, running, playing football… whatever. I really don’t mind I just want him to be active.

NEW MUM? GO FOR IT

I left cycling when I was at the top, an Olympic champion. For me, returning after having my baby meant I had to throw myself in at the deep end and I’m glad I did. I would actually recommend that more mums do that. I’m not saying leave or neglect your child, but it was about how much I could do from home and feel like the old bike rider again. Trust your fitness; it can come back really quickly. And have a reason and a goal. I’m not just going to ride around the roads tor four hours aimlessly. I’m going to do a job then I’m coming back to be mum.